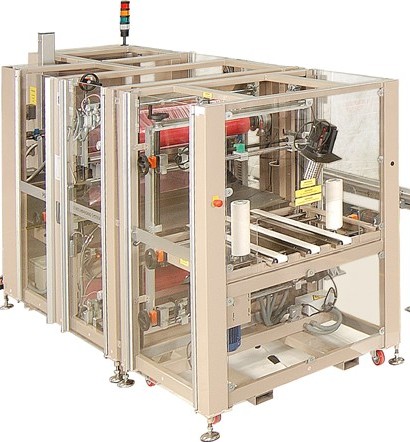 Imperial Tobacco in Nottingham has not only improved the integrity and security of transit packs holding either 3,000 or 5,000 cigarettes but is also saving space on shipping pallets thanks to the installation of several PSB1000 collating and stretchwrapping machines supplied by Marden Edwards Ltd.

The PSB1000 uses twin reels of polyethylene film which is stretched around the collation, forming a very tight band and drawing the packs tightly together. This systems produces a stable and uniform bundle before the seal is made and the film cut.
The machines at Imperial Tobacco are being used to collate and wrap overwrapped packs holding 100 cigarettes and they have the capability to handle these packs at speeds up 100 a minute. They are grouped into collations 5 packs wide by 5 packs deep and 2 packs high, measuring 600mm by 300mm 200mm overall and wrapped using film which can be up to one metre wide.
Once the collation has been wrapped, focused heat guns are used to shrink the overlapping film onto the sides of the collation, fully enclosing the bundle. This prevents the ingress of dirt or dust and makes it difficult for anyone to remove an individual pack without cutting or tearing the film, so providing a high degree of tamper evidence.
This system provides considerable cost advantages over casepacking when the price of polyethylene film is compared to corrugated cases and the resulting transit pack takes up less space than either the casepacked or shrinkwrapped equivalent.