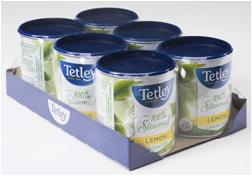 Shrink wrap, also shrinkwrap or shrink film, is a material made up of Polymer plastic film. When heat is applied it shrinks tightly over whatever it is covering. Heat can be applied with a hand held heat gun (electric or gas) or the product can pass through an automated process through a heat tunnel on a conveyor.

The most commonly used shrink wrap is polyolefin. It is available in a variety of thicknesses, clarities, strengths and shrink ratios. The two primary films are either crosslinked, or non crosslinked. Other shrink films include PVC and several other compositions.

Coextrusions and laminations are available for specific mechanical and barrier properties for shrink wrapping food.

Films are stretched when they are warm to orient the molecules from their initial random pattern. Cooling the film sets the film's characteristics until it is reheated: this causes it to shrink back toward its initial dimensions.

Prior to orientation, the molecules of a sheet or tube are randomly intertwined like a bowl of spaghetti. The molecules are coiled and twisted and have no particular alignment. However when a draw force is imposed, the amorphous regions of the chains are straightened and aligned to the direction of orientation. By applying proper cooling, the molecules will be frozen in this state until sufficient heat energy is applied to allow the chains to shrink back. One can visualize this phenomenon by stretching a rubber band and dipping it into liquid nitrogen so as to freeze in the stretched state. The band will remain in this state as long as it is kept at sufficiently cold temperatures. However, when enough heat energy is applied, the rubber band will shrink back to its original relaxed state.

Orientation on a commercial scale can be achieved using either of two processes: a tenterframe or a bubble process. Tenterframe technology is used to produce a variety of “heat-set” products, with BOPP being the most common (heat-setting is a process whereby a film is reheated in a constrained state such that the shrink properties are destroyed).

The second commercial process is the bubble process, sometimes referred to as the tubular process. In this process, a primary tube is produced by either blowing or casting the tube onto an external or internal mandrel, respectively. It is common to use water to help cool the primary tube at this point. After the primary tube has been cooled, it is then reheated and inflated into a second bubble using air much like a balloon is blown. Upon inflation, the tube is oriented in both directions simultaneously.

The family of shrink films has broadened over the years with many multilayer constructions being sold today. Shrink film attributes include shrink, sealability, optics, toughness, and slip. With regard to shrink properties, there are onset temperature, free shrink, shrink force, shrink temperature range, memory, and overall package appearance.

Shrink wrap is applied over or around the intended item, often by automated equipment. It is then heated by a heat gun or sent through a shrink tunnel or oven for shrinking.

Shrink wrap can be supplied in several forms. Flat rollstock can be wrapped around a product, often with heat sealing to tack the film together. Centerfolded film is supplied on a roll with the plastic is folded in half: product is placed in the center portion, the remaining three edges are sealed to form a bag, and the package then heated which causes the bag to shrink and conform to the product placed in the bag. Pre-formed shrink bags plastic bags are used with one end open: the product is placed in the bag, sealed, and sent for heat shrinking.

Shrink wrap is sometimes used to wrap up books, especially adult-oriented ones and certain comics and manga, mainly to prevent them from being read by minors.

Software on carriers such as CDs or DVDs are often sold in boxes that are packaged in shrink wrap. The licenses of such software are typically put inside the boxes, making it impossible to read them before purchasing. This has raised questions about the validity of such shrink wrap licenses.

Previous Next
Continue browsing this site Take me to the site